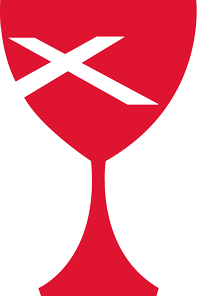 Early History of the Disciples of Christ

The Christian Church (Disciples of Christ) grew out of two movements seeking Christian unity that sprang up almost simultaneously in western Pennsylvania and Kentucky - movements that were backlashes against the rigid denominationalism of the early 1800s.

Thomas and Alexander Campbell, a Scottish Presbyterian father and son in Pennsylvania, rebelled against the dogmatic sectarianism that kept members of different denominations - and even factions within the same denomination - from partaking of the Lord's Supper together.

Barton W. Stone in Kentucky, also a Presbyterian, objected to the use of creeds as tests of "fellowship" within the church, which were a cause of disunity, especially at the Lord’s table.

"Christians," the name adopted by Stone's movement, represented what he felt to be a shedding of denominational labels in favor of a scriptural and inclusive term. Campbell had similar reasons for settling on "Disciples of Christ" but he felt the term "Disciples" less presumptuous than "Christians."

The aims and practices of the two groups were similar, and the Campbell and Stone movements united in 1832 after about a quarter of a century of separate development.

The founders of the Christian Church hoped to restore Christian unity by returning to New Testament faith and practices. But the church found that even this led to division. One group which opposed practices not specifically authorized by the New Testament, such as instrumental music in the church and organized missionary activity, gradually pulled away. That group finally was listed separately in the 1906 federal religious census as the "Churches of Christ."

Another group remained with the Disciples but began a separation in 1926 over what it felt were too liberal policies on the mission field in the practice of baptism. More than 40 years later (1967-69) some 3,000 of those congregations formally withdrew at the time of Disciples restructure. They refer to themselves as the Christian Churches/Churches of Christ.